Riding a bike for the first time for forty years

Not a bike to boast about, it had one speed: forward.
To stop I back-peddled. But hey! it was a bike,
no one was looking, and every downhill minute was wonderful.

RIDING A BIKE FOR THE FIRST TIME IN FORTY YEARS 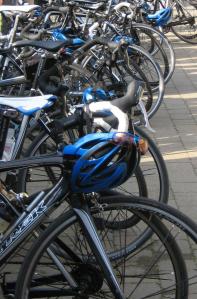 I soar over the cliff top
on a golden chariot
drawn by four beasts
bear, lynx, coyote, eagle

and I am gone
gone to Never-Never-Land

Born in England, she lives in British Columbia. She is married with three sons, Joanna has an MA from the University of British Columbia. She has published in numerous anthologies and in magazines in Canada, the US, UK, and New Zealand, such as Canadian Women's Studies, Convolvus, Endless Mountains Review, Grain, Green's Magazine, Prairie Fire, Spin, Wascana Review, CBC Gallery, and many more...
View all posts by Joanna M. Weston →
This entry was posted in autobiography, poetry and tagged autobiography, bikes, poetry. Bookmark the permalink.