Anytime is good to send the imagination winging in every possible direction
and nothing is what is seems, even ordinary things have a gift beyond themselves,
anything can be something else … … 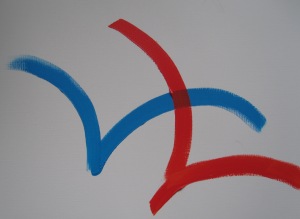 the child drew a bird
with a yellow crayon

she saw the bird
tied to white paper
by yellow lines

circled once
and soared out through
the open window

Born in England, she lives in British Columbia. She is married with three sons, Joanna has an MA from the University of British Columbia. She has published in numerous anthologies and in magazines in Canada, the US, UK, and New Zealand, such as Canadian Women's Studies, Convolvus, Endless Mountains Review, Grain, Green's Magazine, Prairie Fire, Spin, Wascana Review, CBC Gallery, and many more...
View all posts by Joanna M. Weston →
This entry was posted in art, birds, imagination, poetry and tagged art, birds, colour, imagination, poetry. Bookmark the permalink.