Hockey season is well under way but there’s no TV hockey.  So let’s go for it with the Juniors, the Bantams, all those young people playing their hearts out so that they can make the Big Leagues. 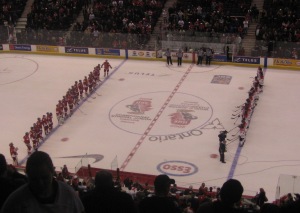 run of blades
thud on boards

flick of stick
long pass
icing
and the call 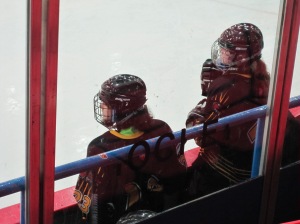 crash of bodies
fall and slide
crack of stick
on puck

a lost game
a good game

The first photo is of start of the 2008 Czech/Canada game, taken by Andrew Weston

The Willow Tree Girl for ages 7-11 … Weston doesn’t miss a beat as she untangles past and present, ghosts, missing treasure, and her heroine’s longing for success.

Born in England, she lives in British Columbia. She is married with three sons, Joanna has an MA from the University of British Columbia. She has published in numerous anthologies and in magazines in Canada, the US, UK, and New Zealand, such as Canadian Women's Studies, Convolvus, Endless Mountains Review, Grain, Green's Magazine, Prairie Fire, Spin, Wascana Review, CBC Gallery, and many more...
View all posts by Joanna M. Weston →
This entry was posted in chant, game, hockey, poetry and tagged game, hockey, hockey chant, poetry. Bookmark the permalink.

2 Responses to We will rock