Hockey season! For aficionados it’s the best time of year. For the players, it’s hard work, lots of sweat, and great fun. What more can anyone ask ….

face-off
ref drops the puck
backs away
from hacking sticks 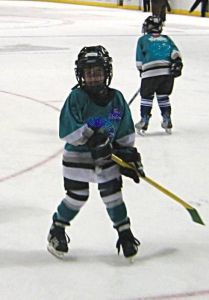 for a shot at goal
goalie pounces

Those Blue Shoes for ages 7-11 … Weston’s … skill in juggling time past with time present … the plot unfolds with fast-paced action, mystery, suspense and even a ghost. Joan Givner

Born in England, she lives in British Columbia. She is married with three sons, Joanna has an MA from the University of British Columbia. She has published in numerous anthologies and in magazines in Canada, the US, UK, and New Zealand, such as Canadian Women's Studies, Convolvus, Endless Mountains Review, Grain, Green's Magazine, Prairie Fire, Spin, Wascana Review, CBC Gallery, and many more...
View all posts by Joanna M. Weston →
This entry was posted in game, hockey, poetry, sports and tagged cheering, fans, game, hockey, hockey sticks, poetry, refs. Bookmark the permalink.