I’m sure we’ve all seen sleeping bags under bridges, in culverts, people dossed down in doorways. Does giving money help? Or is a smile, a greeting, enough? Low-cost housing in every city on the continent would help …

he lived under bridges 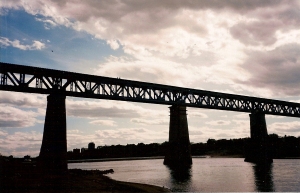 some nights he near freezes
to cold clear stars

who would house him
with no job
no Social Insurance Number?

he owns only
his name

A Summer Father … Here is poetry … interweaving images culled from a wartime childhood with bittersweet memories of a “summer father”. Lynda Monahan

Born in England, she lives in British Columbia. She is married with three sons, Joanna has an MA from the University of British Columbia. She has published in numerous anthologies and in magazines in Canada, the US, UK, and New Zealand, such as Canadian Women's Studies, Convolvus, Endless Mountains Review, Grain, Green's Magazine, Prairie Fire, Spin, Wascana Review, CBC Gallery, and many more...
View all posts by Joanna M. Weston →
This entry was posted in homelessness, hunger, poetry, weather and tagged food, homelessness, poetry, sleeping, weather, winter. Bookmark the permalink.