Half way through summer, and I’m still voting for idleness. I’m painting
on the deck, mostly seascapes, relaxing with a good book and, just
occasionally, staring into space …

ZONED OUT    (an Abecedarian)

zapped by contemplation,
yoga’d to the last nirvana,
xanthic in brilliant hue, a place
where I could hibernate for space, 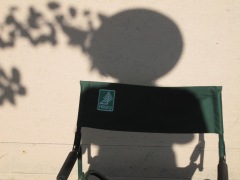 vetoed out of shape or form
until I come, nice and warm,
to that sublime destination,
supposedly ethereal,
reached by mental expenditure
quintessentially obscure,
potentially unknown
or peacefully imagined,
neither seen nor heard by anyone,
missing from any map,
lost in meditation’s lap,
known to theorists alone,
just as paradox is realized

in every balanced state,
half seen and half debate,
gleaming in some stranger’s eye,
fickle as a wild sci-fi,
exciting as a race of snails,
delight incipient as I
contemplate my navel, and
blink at last into
a delirious popped zero

Those Blue Shoes for ages 7-11 … Weston’s … skill in juggling time past with time present … the plot unfolds with fast-paced action, mystery, suspense and even a ghost. Joan Givner

Born in England, she lives in British Columbia. She is married with three sons, Joanna has an MA from the University of British Columbia. She has published in numerous anthologies and in magazines in Canada, the US, UK, and New Zealand, such as Canadian Women's Studies, Convolvus, Endless Mountains Review, Grain, Green's Magazine, Prairie Fire, Spin, Wascana Review, CBC Gallery, and many more...
View all posts by Joanna M. Weston →
This entry was posted in comfort, contemplation, poem, relaxation, summer and tagged contemplation, idleness, imagination, poem, relaxation, summer. Bookmark the permalink.