Remembrance Day is coming up, and I wonder about my father, who died in Normandy, June 1944: what kind of man he would have been if he had survived the war? Was he changed by his experiences of the desert, by fighting …

if my father
had come back
from the war 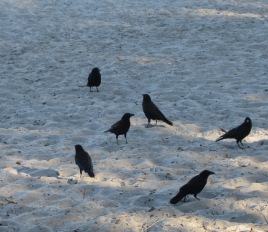 New! NEW! ‘A Bedroom of Searchlights’: poetry. This collection draws a picture of the poet’s divorced mother, an artist with two children, who struggled with poverty, war, and the realities of daily life, yet still found beauty and comfort in her garden, and her art.
From Inanna Publications, May 2016.

Born in England, she lives in British Columbia. She is married with three sons, Joanna has an MA from the University of British Columbia. She has published in numerous anthologies and in magazines in Canada, the US, UK, and New Zealand, such as Canadian Women's Studies, Convolvus, Endless Mountains Review, Grain, Green's Magazine, Prairie Fire, Spin, Wascana Review, CBC Gallery, and many more...
View all posts by Joanna M. Weston →
This entry was posted in peace, people, poem, Remembrance Day, war and tagged birds, children, everyday, people, poem, poetry, relationships, Remembrance Day, war. Bookmark the permalink.