I’ve been somewhat obsessively writing triolets for the last month or so, and here are two of them, the first relates a friend’s sailing adventure with a dog, the second is all about summer! Triolets have a very specific rhyme scheme and I have adhered to it …

they heaved the dog on board 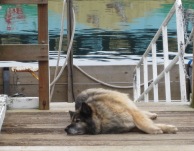 kids playing all along the shore
while adults lie and soak up sun,

‘A Bedroom of Searchlights’: poetry. This collection draws a picture of the poet’s divorced mother, an artist with two children, who struggled with poverty, war, and the realities of daily life, yet still found beauty and comfort in her garden, and her art. From Inanna Publications, 2016.

Born in England, she lives in British Columbia. She is married with three sons, Joanna has an MA from the University of British Columbia. She has published in numerous anthologies and in magazines in Canada, the US, UK, and New Zealand, such as Canadian Women's Studies, Convolvus, Endless Mountains Review, Grain, Green's Magazine, Prairie Fire, Spin, Wascana Review, CBC Gallery, and many more...
View all posts by Joanna M. Weston →
This entry was posted in beach, dogs, poem, summer and tagged beach, boat, holiday, poem, sailing, summer, waves. Bookmark the permalink.