There’s something almost ethereal about looking up and watching a building going up, the height, the spaces between studs and rafters … 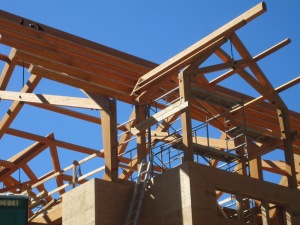 blue drums them
into construction
one floor at a time
above concrete forms, joists
and particleboard
where they stride the sky
like the bolts of God

To Bethlehem: ‘This little book is delightful, full of … poems on this timeless subject. … the most fun is the little prose vignettes of the common people in the Christ-child story. The slave who looks after the wise men’s camels, or the overworked maid at the inn who has to fetch water for the birth, and many more. A lovely gift for the reader on your Christmas list!’ Rosalind Adams. Available from Amazon and Kindle.

Born in England, she lives in British Columbia. She is married with three sons, Joanna has an MA from the University of British Columbia. She has published in numerous anthologies and in magazines in Canada, the US, UK, and New Zealand, such as Canadian Women's Studies, Convolvus, Endless Mountains Review, Grain, Green's Magazine, Prairie Fire, Spin, Wascana Review, CBC Gallery, and many more...
View all posts by Joanna M. Weston →
This entry was posted in building, poem, sky and tagged blue, construction, hammer, poem, weather, wood. Bookmark the permalink.

2 Responses to In the Heights